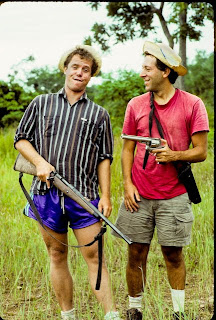 One of my oldest friends, Marc, said yesterday when I told him about another roller coaster story of my life which is happening right now:

“I say, go for it! Can´t wait to hear what comes next! Your life is more interesting and unusual than a science fiction book!”

It´s Marc and me on the photo to the top right here. It is taken by our common friend Steve Jewell in Mikumi National Park in Tanzania, I think 1988, when I was cycling from North-Cape in Norway to South-Cape in South-Africa and Marc started his 7 year all around the world cycle tour. The reason we are armed is that earlier that day, whilst walking through the high crass of the park, following a group of baboons and the two female scientists who´d been tracking this especial group and family for a year, suddenly we heard a roar and a female lion stood up in the grass!

I remember the female scientists had told us before, if this would happen, don´t run! They did! And so did the two armed rangers we had with us, so the only one´s left, glued to the ground like three termite mounds, where Steve, Marc and me. Most likely by pure shock, even though I do seem to remember that Steve, also one of my best friends, afterwards said that he was cool as a postcard and just wanted to study the behavior of the lion…Sure, Steve, I also remember you were having it off with one of the scientists….

I also remember it all happened so fast, and since I am such a coward, I took a step behind Marc, so if the lioness would go for an attack, it wouldn´t be me who got killed. Sorry Marc, I do believe it was all instinct….Anyway, the lioness, as all wild animals, feared us more, and turned around and slowly ran off away from us. That is why we are armed. And that is also the reason we have hair and look young, which is not the case today…

I often get questions what my old partners on route are doing today. Steve, he joined me in Maasailand aswell, where he met his wife Theonestina, with whom he lives in Canada today and have two children. Last time I saw him was 5 years ago and he was extra-ordinary fat. He is still one of the funniest people on earth and i talk to him on Skype irregularly. Marc isn´t to thin either, today, but a successful business man and runs a spa in Williamstown. On and off he´d like to hit the road again and just came back from a tour in Namibia. read about it here! Marc is a very generous, smart, funny and extra-ordinary kind person who right now lives by himself with his love of life, the Golden Dream, his dog. He will in some capacity be involved in the Expedition and my future. He is one of my very best friends. Last time I met him was also years ago, I think 2 years ago, when I visited him in Williamstown for the second time. He was known as Hub Sprockett in Africa. And Steve went under the name of Steve Clitoris. Or at least that is how he was presented at a conference somewhere in Africa. I think it was Mbeya. That time was the funniest in my life. I had ten good laughs a day, African style. An African laughter is different to all others. It begins in your stomach, than kind of rolls all the way up to your mouth where it explodes! Best feeling on earth it is, and it is a long time since I was even close to a laugh like that. I think it was very close in Yemen though.

There´s not a lot to laugh about in Sweden. Maybe life was better before, as the old people tend to say. Nope, from now on, I will find my old habit to laugh! This is my next little personal project, laughter!