On and off I get an email from somebody who is on his way to do an Expedition and wants to document the adventure by doing a documentary at the same time. Yesterday I had another request to describe how to do it. Well, there´s many ways. I have throughout the years done 3 of them. The last one from Siberia. And during that Expedition I wrote this specific report, which still stands today:

Making a documentary and TV-program´s in -58°F

It is the 25th of January today and the temperature is -55°F. Unfortunately the temperature seems to be heading downwards again. We´ve both caught a cold and this is due to two types of stress we´re experiencing at the moment. Firstly, the positive stress, because we´re working day and night with a new TV-program to be sent off. And secondly, the negative type of stress, since we know that we´ll soon be outdoors, day and night, for a month to come. We´re really worried this time. Unfortunately, we know what to expect out there.

One of the most frequent comments I get from people back home, generally whilst lecturing, and through many emails on this trip, is how in earth did we persuade a camera team to join us on the Expedition and film us at all times. I tell them the truth. We are the camera team. We do every aspect when it comes to producing the documentary. Except the final touch of editing the right colors, the subtitling and graphics. We don´t have the machinery to do that. People seldom believe me. Which I can well understand, since they´re used to adventurers who primarily do sporting Expeditions and lack the knowledge how to film, edit, think dramaturgically and don´t understand the full value of proper sound editing. They´re used to adventurers who have a professional camera man which shows up on and off during the Expedition, or as the general rule seems to be, they do a lot of professional filming during the preparations and afterwards and then use static cut-ins from the Expedition taken by the adventurer himself. All generally shoot from a tripod. There´s absolutely nothing wrong with this. At times it is very exciting, interesting and ground breaking. But when you´ve seen a bunch of the same types of production, it turns out utterly boring. My opinion. I am of the belief that every new documentary should add something new to the general knowledge of daily life and its own genre. The worst, though, I think, is when this type of adventurer considers a production made this way as his own. Unfortunately, this genre of ours, is full of too many self-centered individuals. An adventurer once called me on the mobile a few years ago and asked me if I could assist him with the right contacts at SVT, Sweden´s biggest, most serious and best TV-company.

´´I know how to film!´´ he exclaimed when I told him it was no easy thing for your work or your idea to get accepted, but he continued self-assured: ´´It is dead easy!´´

It isn´t. This adventurer hasn´t, of course, done one single production by himself. And nothing he´s done so far produced by others have appeared on SVT. To be your own camera team is very difficult and I think it is impossible if you don´t make it a life style as I´ve done. And as Johan is doing as well on this Expedition. Every single moment we´re spending in the canoe or skiing, when not thinking about our beloved ones or when one is too tired to think, one has to plan for the next scene. Where to find the right atmosphere, the right light and a scene which can develop and move your documentary ahead. And trying to plan your filming when you get attacked by a 800 lbs heavy bear isn´t easy. And it is even harder to get it on film! Fortunately, we´ve understood a long time ago, how utterly dull we are ourselves in comparison with the people we meet during our Expeditions. But filming other people can even be more difficult. Especially in this extreme cold, which is putting a severe strain on the success of our upcoming documentary and our monthly TV-program´s.

As an example if this, let me tell you about last week when we spent 12 tedious and bumpy hours in a jeep to reach a very interesting village. The temperature was so low that we couldn´t persuade people to stay outdoors more than quarter of an hour, they simply froze too much, so we didn´t get one single decent scene from this visit. And when we do have interesting people in front of the camera, and who on top of that doesn´t get bothered by continues re-takes, the camera fails us. In general, the camera doesn´t cope with the cold more than 10 minutes per day before the tapes freezes solid. And it takes at least two hours every time for the camera to thaw out. It doesn´t seem to help at all that we´ve made a cover from and old blanket to keep it warm! And it is only during the first 30 seconds that you actually can see what you´re filming. After that, all you have in your eye piece is a lot of lines. Once back indoors we leave the camera untouched for four nervous hours until we check what has stuck or not. Unfortunately we´ve lost a great deal of good material due to the cold. But it is not only cameras which freeze. Almost all frostbites that we picked up during our last ski trip from Zyryanka was due to the fact that we were handling the camera too long.

However, even if we get everything we want together and filmed, we still have the worst to come. Namely to safely transport all the material to Sweden and hoping it will be ok once at home in the studio. This fact causes a terrific amount of worry during every Expedition. Much more than attacking bears!

One little snippet from the film can be seen here! 33 763 viewers so far! 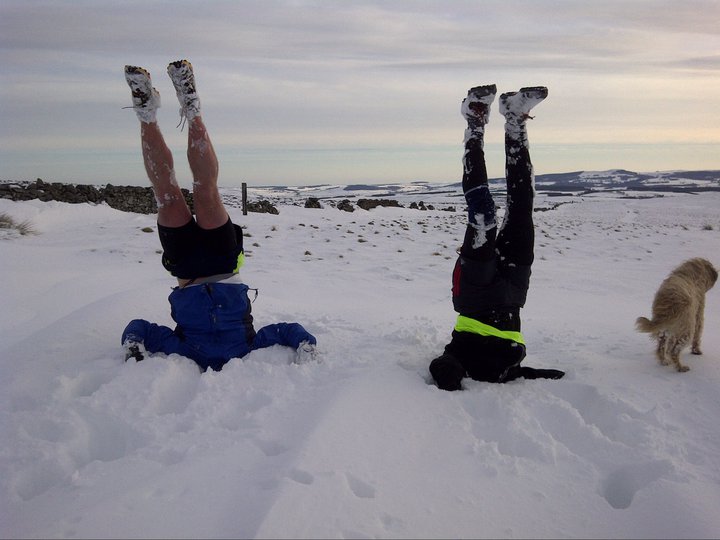