Skip to content
My first dream as a teenager was meeting the Auca Indians of the Amazonas. I read about them in the books of my favorite author. His name was Rolf Blomberg. I read his book Anaconda many times. Especially the chapter on meeting the Auca.
One of my main projects during the bicycle journey from Chile to Alaska 1986 was meeting the Auca. I didn´t know than that the name Auca meant savage. It was a pejorative exonym used by the Spanish invaders and the Qucha highlanders of Ecuador. Their real name is huorani. And they were not discovered by the outside world until the early 1950´s. And I remember the photos of them in his books, long ears. They were hunterers and gatherers. And had a long blowgun with poisioned arrows when they hunted! A boys dream! 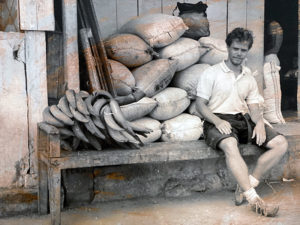 The first picture you see here is me waiting for a boat to take us to the Huorani. Down the legendary river Napo. Into the Amazon Jungle. I look confident, eager and happy. The big adventure is waiting!
However, due to little money, Ed Sismey and me had to do an organized tour. With other travellers. A Belgian girl and 2 Swiss youngsters. We could only afford a local guide who had lived with the Huorani. It was said. So he gave us all rubber boots and off we went. As quick as the boat pilled up to a small landing place in the Jungle, two Huorani hunteres stepped out. I saw their ears, they carried their long blow guns and they had a wooden quiver with the poisioned arrows! Around their neck the carried another small quiver. The guide said it was cotton for the arrows to fly better. The dream had finally come through! 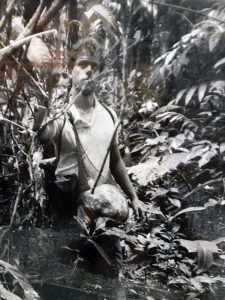 In the second image you see me pretending to slog my way through a dense Jungle with a machete. In heavy deep mud. So far, the dream continues. On route through the Jungle the hunterers attempted to shoot down a monkey or two. But didn´t suceed. But before we reached a settlement we met another hunter who carried a monke in its tail. It was ready to be roasted for dinner. The third picture is this real life Amazon hero from the books of Rolf Blomberg! He pointed down to a track in the mud and said something that our guide translated to:
Ozelot. 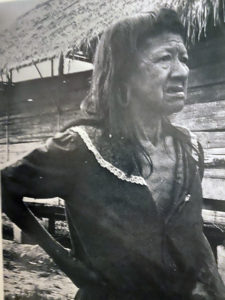 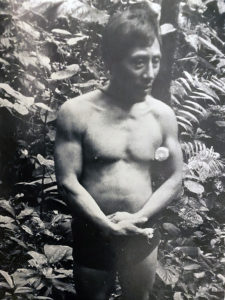 The fourth photo is reality. After this walk we ended up in a settlement where this woman immediately came up to us and asked for money. She was suffering poverty the guide said. And that´s where the dream stopped. The rest of the visit would be plagued by discussions and disagreements between the group. And the guide. He came to rest and flirt with local women. The Swiss wanted to understand the flora of the Jungel. The rest of us just wanted full adventure. Three days later we returned to Mishuali. Where we had left the bikes. 30 years on from the time of Rolf Blomberg, modern civilisation had moved in with its injustice, complications and need for control.
But the first image of the hunter carryng the monkey stayed in my mind the rest of the journey.