Living in the great outdoor is never really easy. Yes, it is the most fulfilling and freest life possible, but living out there a long time, one realizes that there is always something which always keeps you on your toes. The continuously changing weather patterns, the availability of food and always looking for firewood. And, especially in the northern hemisphere and the seasons which are free of winter, the presence of mosquitoes, gnats and flies. In the far north, that makes these times quite demanding. These thoughts just came to my mind the other day, when me and the family were pondering whether to go camping on the coast or go inside the forest. They both love the fire, sleeping outdoors and the BBQ which is part of the routine. But I am trying to tell them, the mosquitoes will make life a bit more demanding in the forest.

“We just have to live with it” , my wife said without really understanding. My thoughts. But maybe that is because I have lived in Siberia, where the harshest of the harshest environment exists and of course, I found a story about these flying nuisances from the Siberian Expedition: Today, we left the mountainous region for awhile. The snow-covered and most spectacular of them, forever, since we have entered a new ecological region today. The flat, sometimes rolling, but alway gigantic Siberian forest, the taiga. When we leave the settlement of Seimchan, we will head for an area which is even more remote, untouched and unknown than the one we´ve just left. The area we´ve entered now is presently dominated by swampland, leaf forests and an enormous amount of gnats (or no-see-ums as they´re called in Canada and Alaska). Mosquitoes are still with us, but they seem have slowed down, finally. But, the gnats have arrived instead, millions in numbers, attacking us fiercely as quick as we get out of the canoe, ready to set camp. We can´t even get away from them inside our cot! Those specially made bug shirts we have are useless in this case and the repellent we´ve brought, well, they seem to like the taste! The only thing we can do, as always, is to accept reality and show patience. Which is not easy. Especially whilst trying to enjoy dinner during a heat wave like the one we´ve been hit with these last two days.

When we do the fire, we always place it so that the wind goes in the direction of the cot, gnats don´t appreciate too much smoke, but then of course, you need a wind. Which we haven´t had these last three days. So, these last two days of dinners, we´ve stood very close to the fire, we two, very close to be able to use the smoke to avoid the gnats. Almost like Siamese twins, sweating tremendously. I have to add, we try to avoid putting up camp in the forest, since that is half suicide, so we choose barren and stony sandbanks. But by doing this, we don´t have a shadow to hide from the blazing sun, therefore we perspire even more. Still, we stay there next to the fire as long as possible. In general until we feel close to fainting or feel the smell burning our clothes! Or until we have to go into the forest next to us and look for more wet firewood to be able to generate more smoke. This we do try to avoid as far as possible, since one gets eaten alive in there! For this reason, mainly we just stand there, tightly together in front of the fire, in the smoke, coughing with burning eyes, waiting for the dinner to get ready. Which takes time, one only using wet firewood. When, eventually, the dinner is ready, we finish it off far too quickly, and then we dash off down to the river to do the washing up, then quickly back and inside the tent. Sweat continues to pour down. The gnats are there also, see finally, we can´t handle there presence and get forced inside our winter sleeping bags. During a heat wave. The art, folks, is just accept things the way they are.

What kind of dinner have we had these last two days? Well, since we´re forced to pick up speed to reach the settlement of Zyryanka, 540 km:s north of here, before the winter ice settles on the river in the beginning of October, we haven´t had any time to put out our fishing nets overnight and for this reason, our diet consists of tinned Russian pork and cow. All parts of the animals are squeezed in to these tins.

Fur, eyes, intestines, well, the lot. It keeps for 8 years. It tastes fairly good and it gives us plenty of fat and energy. We eat it together with mashed potato or pasta. And bread which gets moldier by the day. We don´t throw anything away, even though we know the civilization arrives tomorrow in Seimchan. We know harder times will eventually arrive, and then it is good to have disciplined oneself to eat everything. In any case, we cut the worst parts off!

See the YouTube film below, even if it is in Swedish, you will get a feel for these flying “friends”…. 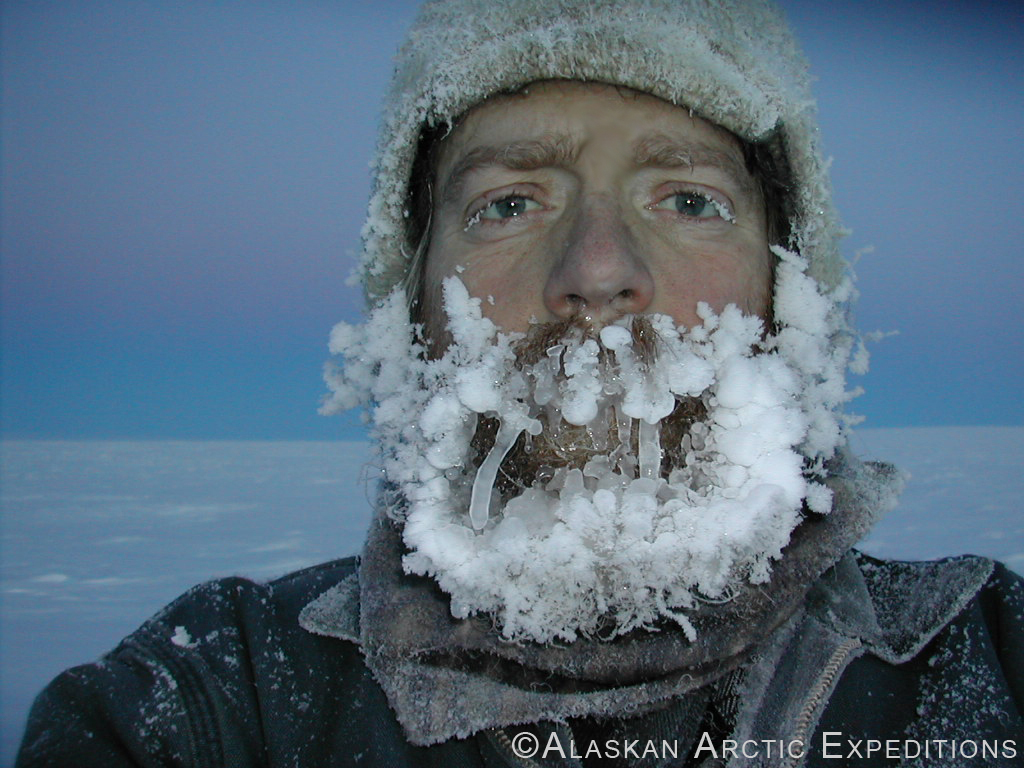