In the midst of the punishing Canadian winter, we, Bert Poffé and Kiki Nárdiz set out on an adventure through Atikamekw territory in Québec, together with members of the 3 Atikamekw Nations, traveling through Northern bush country amongst the Obedjiwan, Wemotaci and Manawan communities. We wore traditional moccasins and babiche snowshoes, and slept in heated winter wall tents and family hunting camps, used over generations by First Nations and Voyageurs.

It had been the dream of us to return to this magical land since traveling several times to Atikamekw Gerald Ottawa’s bush camp between June 1999 and March 2001. There, they learned many traditional skills and bushcraft techniques essential for both winter and summer survival. For the next 13 years we kept in touch with the Manawan and by the time 2013 came around it was felt a trip to fulfill their dream was long overdue. Plans for another adventure in their beloved Atikamekw area were underway.

After more than 6 months of preparation and training for the adventure, we finally landed in Montreal on February 1st, where the temperatures were a balmy -6c. Pascal Ottawa, coordinator of Tourisme Manawan and the snowshoe expedition met them from the airport and they headed 300 km north of Montreal, straight to the Manawan community. The next day was used for preparing and testing gear and drinking coffee, talking about what would come.

On the 3rd day the group – consisting of Carl Ottawa, Debby Flamand and others from Manawan – left together on a 10 hour journey through forest roads, stopping for an obligatory poutine in the Wild West village of Parent, and eventually arriving 300km further north. It was close to midnight when the expedition team finally arrived at Obedjwan.

The following day, after a hectic morning of last minute preparations and paying respects to one of the village elders, the Atikamekw Snowshoe Expedition 2014 took off on it’s adventure. The goals of the adventure were to: The first days were spent crossing the Gouin Reservoir, an area almost 10 times larger than the Capital Region of Brussels. Temperatures as low as -35°c at night and between -15°c to -25°c during the day, with a harsh wind chill on top of that, made traveling a very difficult task. Long pauses were unthinkable, the group had to keep moving. In these conditions, food needs to be stored in a small bag that is kept in contact with the body at all times to avoid freezing.

Although the expedition was not unsupported as intended everything turned out well because the Atikamekw Nation wanted to treat us very well. ‘Roadrunners’ headed out in front of the walkers and scouted out camping spots for the evening. Where possible the roadrunners erected the wall-tent, or prepared the hunter’s cabin with a very welcoming fire to make the travelers feel more comfortable after walking between 18 and 26 km per day.

After 8 days traveling on ice and snow the expedition team arrived at Wemotaci, where they had a one day lay-over for resupply. During the first part of our walk youngsters from both Manawan and Wemotaci were inspired and asked to be part of the second leg, walking the remaining 100 km to Manawan with the expedition team. The team was of course delighted to walk together with 11 walkers (amongst them Debby Flamand, wife of Carl Ottawa) on the Atikamekw land. The dynamics were completely different: travel was slower, more organization and coordination was required, but the result was that it all became even more authentic, traveling like a real clan. The temperatures became less extreme towards the end, and the weather was still bearable. After 5 days they arrived at Manawan where the whole village turned out to welcome us with cheer and happiness. That evening, we ate a traditional dinner at the local school, and were given goose bumps at the concert of the Black Bears Pow Wow singers. The days after this unforgettable adventure were spent in Manawan, where Bert and Kiki were invited for breakfast, dinner and supper by many families, and where they also had the opportunity to talk to the children of the local school.

After a full 3 weeks living and travelling with the Atikamekw Nation, we returned to Europe with a little bit of Atikamekw in their DNA and hope to return as soon as possible. The Atikamekw are the indigenous inhabitants of the area referred to as Nitaskinan (“Our Land”), in the upper Saint-Maurice River valley of Quebec (about 300 kilometres (190 miles) north of Montreal), Canada.

The population currently stands at around 4500. One of the main communities is Manawan, about 160 kilometres (100 miles) north east of Montreal. They have a tradition of agriculture as well as fishing, hunting and gathering. They have close traditional ties with the Innu people, who were their historical allies against the Inuit.

The Atikamekw language, a variant of the Cree language in the Algonquian family, is still in everyday use, making it therefore among the indigenous languages least threatened with extinction. But, their homeland has largely been appropriated by logging companies and their ancient way of life is near extinct. Their name, which literally means “Whitefish”, is sometimes also spelt “Atihkamekw”, “Attikamekw”, “Attikamek”, or “Atikamek”. A small number of families still earn their living making traditional birch bark baskets and canoes. For food, they fished, hunted, and trapped, supplementing their diet with agricultural products such as corn and maple syrup that the Atikamekw made by boiling the sap extracted from maple trees. Implements would be made of wood and clothing of animal hides. Other necessities were obtained through trade with tribes in nearby areas. During the summertime, the Atikamekw would gather at places like Wemotaci. Then, in the fall, they would pack up and disperse through the boreal forest for the winter.

When the French arrived in the region, the Atikamekw became increasingly dependent on externally controlled trade, particularly the fur trade. They were considered a peaceful people, sharing the region with the Innu (Montagnais) in the east, the Cree in the north, and Algonquin to the south. But they had conflicts with the Mowhaks. Through their Innu allies, the Atikamekw caught devastating diseases that were brought over by the Europeans. Around 1670-1680, a smallpox epidemic devastated the Atikamekw tribe.

The French pulled the Atikamekw into a trade war between the Montagnais (Innus) and the Iroquois in which the Atikamekw and Innus did not fare well. Those Atikamekw who had survived the smallpox were slaughtered by the Iroquois. However, at the start of the 18th century, a group called “Tête-de-Boule” reappeared in the region.

While there exists no certainty as to the origin of this group, they may have been a regrouping of the few Atikamekw survivors and who were possibly associated with other indigenous nomadic tribes. But they are considered to be unrelated to the former Atikamekw even though they lived in the same area and took on the same name.

Today, the Atikamekw, like their historical allies the Innus, suffer from mercury poisoning due to the central electric power companies that had contaminated the water supply. Despite all these events, the Atikamekw were not moved off their traditional grounds. The Atikamekw have their own traditional culture, language and rituals, though they had strong influences from the neighboring peoples. From this grouping, three prominent communities developed, where each of the three communities spoke the same language but with unique dialects reflecting each of the three. Members of the tribe as a whole generally speak the Atikamekw language, but the majority do not write it.

Traditionally, the Atikamekw lived in dome-shaped homes, covered with bark called “piskokan”. The floor was carpeted with spruce boughs and furs were used as beds and blankets. The Atikamekw developed a technique for preserving meat by smoking and drying, a process still practiced by some families. Collected berries were processed into a paste that could be preserved for several weeks. The making of hunting equipment (bows, snowshoes, dogsleds) as well as clothing and blankets, was in former times a task necessary for survival. Like all First Nations, the Atikamekw stood apart by a special way to decorate their clothing. One distinguishing feature was the bells covering their ceremonial robes that were made of bones emptied of the marrow.

The Atikamekw have been recognized for their skill in crafting birch bark items such as baskets and canoes, decorated with beautiful designs. These skills were always transmitted from generation to generation so that even today they are still practiced, giving them the nickname “people of the bark”. Interestingly, handicrafts made from birch bark is less practiced in Obedjiwan than in other communities since it is located in the boreal forest where conifer trees dominate.

Bert Poffé is a 44 year old Belgian explorer with a special interest in the First Nations of the North, and indigenous people and nomads in general. Travelling through wild places and learning from nature is what he loves most. He was lucky to meet inspiring people of different Canadian First Nations such as the the Anishnabe, Atikamekw, Huron and Mic Mac, and to be able to live with nomadic Mongolian families. Bert was most influenced by Canadian trapper, warden, hunter an canoeing guide, Roy Perritt, who became a very good friend. After a canoe crossing of the Algonquin Provincial Park in 2002, and with whom he would participate in more adventures and expeditions afterwards. By exploring some of the wildest, most beautiful and special places in the world, he gained respect for Mother Earth and at the same time he tries to inspire others to go exploring. He is an advocate of the environment and for the indigenous peoples. Bert tries to go, step by step, towards a more natural and ecological balanced way of life. His homepage is http://www.inuksuk.be/bert-poffe 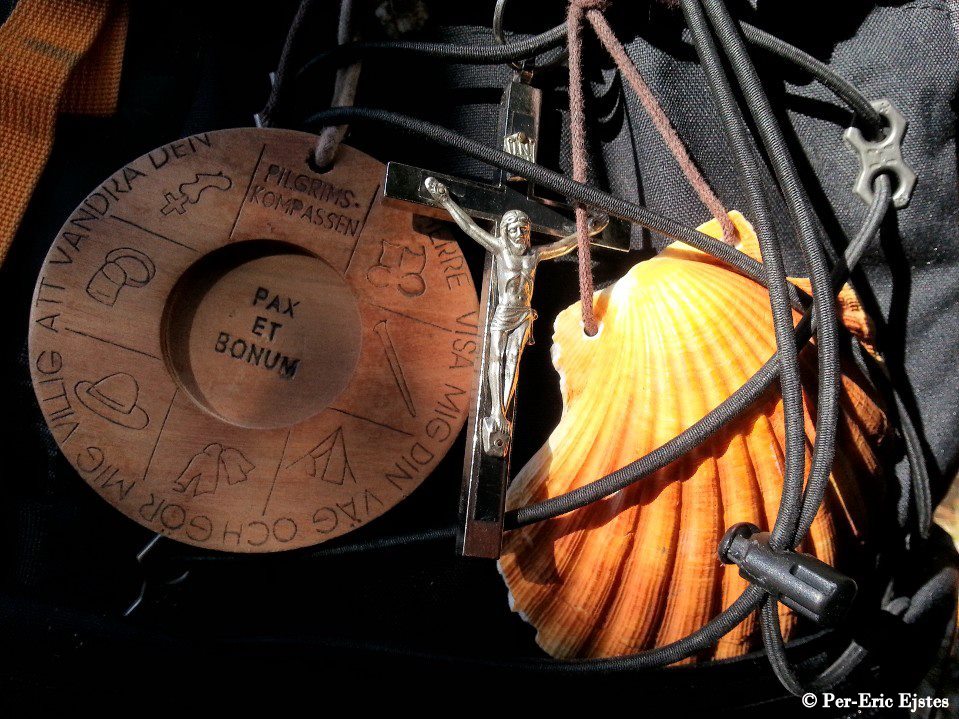 I am a modern pilgrim By Anders Stävhag