Skip to content
The Darien Gap. Or just El Darién. Even back in the year of 1987 it had a dangerous reputation. Smugglers, drug runners, quicksand, mosquitoes, leeches and swamps. As far as we knew only three cyclists had passed the area before us. A legendary cyclist, who I believe did the first crossing of the Sahara on a bicycle, Ian Hibble. He and two friends, who the rumour says, became Christian missionaries after the tough crossing, they did it 1972. We had two local men from the village of Turbo with us. A cunning fella called The Shadow (La Sombra) , who´s name was Cariño Santos and a local boy named Dilson. (see photo) La Sombra called us monos throughout the trip. Monkey´s. He continously demanded more money. Always when the situation was difficult. Which it was for most of the time it took us to cross from road to road. About 800 km. (I think 1½ month)
It was a very hard crossing. There´s a reason we were the 4th and 5th cyclists to cross. There´s no roads. Lots of trails through a dense Jungle full of streams, ups and downs and swamps. We had a lot of gear packed in home made rucksacks of gunny. And we used bike tubes as straps. Every swamp for example, we had to go back and forth a couple of times with all our gear. (See photo) Every times there were leeches. Especially around the chest, on the back and legs. We took them off with salt and burning cigaretts of which La Sombra wanted money. 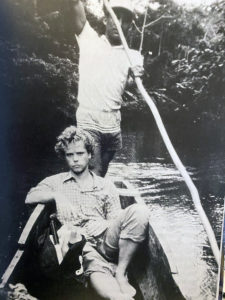 Halfway jaundice broke out. I peed orange and pooped white like a hyena. I got bitten on my right leg by a conga ant (see trip in canoe) and the swelling was considerable. We all thought it was a poisonus snake at first but couldn´t find the fang marks. I lost 18 kgs. Ed almost the same.
What a great adventure! We came across the Cuna Indians, where John Blasford-Snell had left parts of his jeep from a failed crossing. Amazing they made it that far! The Jungle was beautiful. But I was ill most of the journey. But we made it through. 5 months later I arrived in Fairbanks. Alaska. Ed used another year and a half.
This is a classic adventure which is very hard to find nowadays. I know this from experience today. But not back then. I am glad we did it!
#kensingtontours #påcykelfrånchiletillalaska #dariengap #eldarién #edsismey #cariñosantos #cuña #cunaindians #cyclinglife #cycling #biketrip #cyclingadventure #explorer #johnblasfordsnell #turbocolombia #cycletouring #bikingadventures

What to do with Mali? Will it be the next Somalia?