”I love Putin. Putin is good for Russia. He makes us proud. And we trust him!” 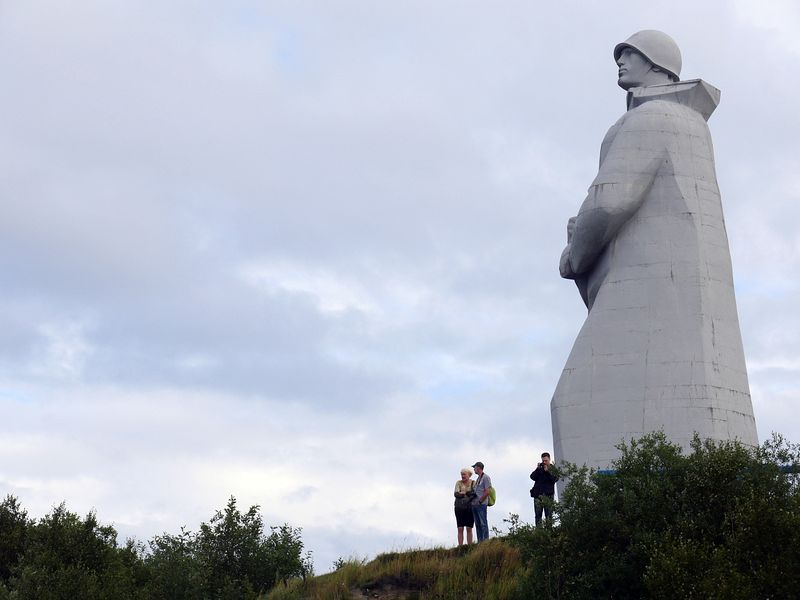 I read this sentence on a mobile phone translator. It was our local taxi driver telling Mikael and me about his thoughts on life in Murmansk today. Valodja had made his drive a mission to give us a perspective on Murmansk and Russia. We hired him to take us first to see one of the highlights for a visiting tourist to Murmansk. Listen to this name. Memorial to the Defenders of the Soviet Arctic during the Great Patriotic War. Or just Alyosha. The monument was as big as the name is long. 42.5 meters tall. A giant Soviet warrior overlooking the Kola Bay. The Soviets really knew how to market themselves. The monument was dedicated on the 30th anniversary of the defeat of German forces in the Arctic, October 19, 1974.

“I use many weekends to go out to former battle fields to look for signs of lost family members”,  Valodja told us, when he rerouted our trip to the Lenin Icebreaker. 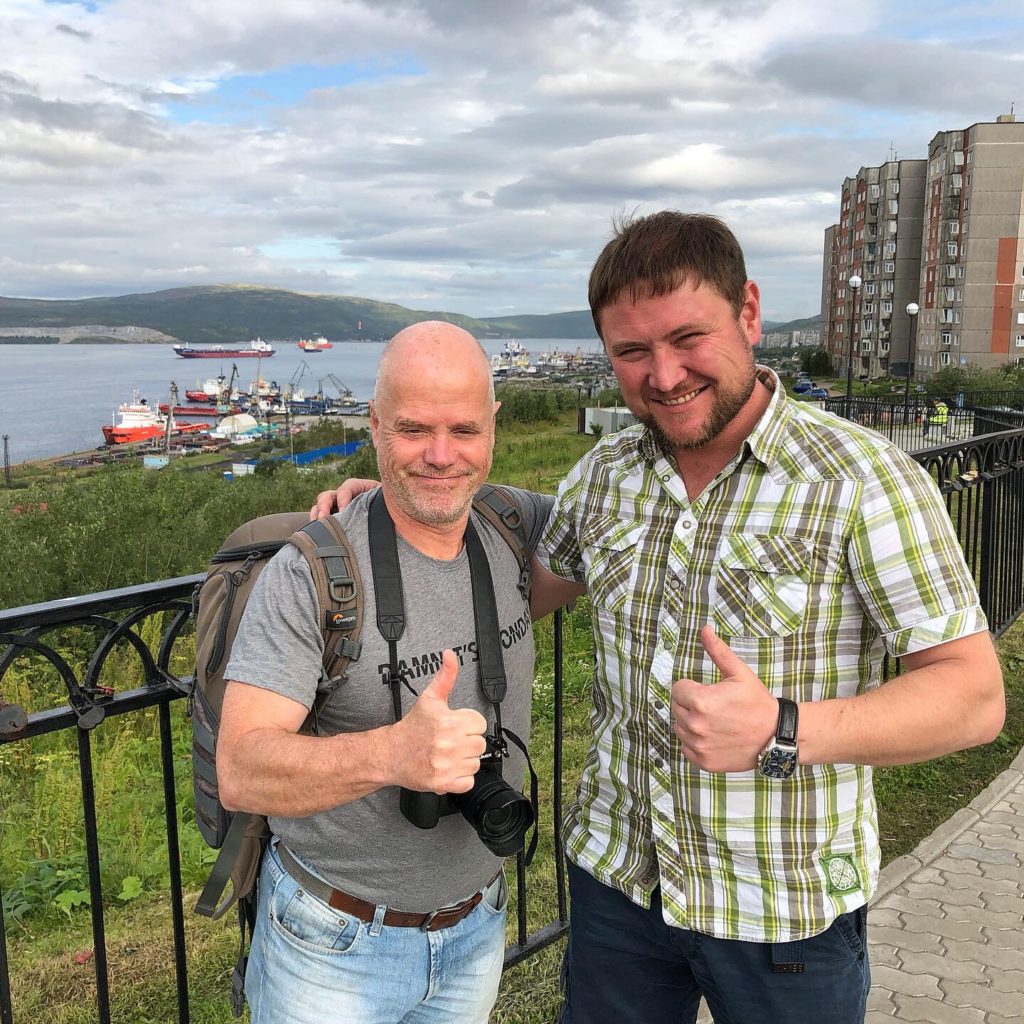 Instead he took us to his home area. A set of apartment blocks overlooking the bay. And he said via his mobile translator he grew up here with a big family. We also stopped at an old war memorial. As quick as we stepped out of the taxi, we heard music from the war. Sad, penetrating and strong. Another Soviet memorial. Murmansk suffered as bad as Leningrad and Stalingrad during the Second World War. The city went through extensive destruction. As we could see of the photos pinned up at this memorial. It was an odd feeling overlooking a Russian sauna, banja, at the same time, with half naked smoking Russian men just below us.

“This will never happen under Putin” , Valodja said once back in the taxi, heading for the world famous ice breaker.

“This is a very common opinion among people who never grew up during the Soviet era” , Anna, our great guide said later when we brought up this subject. 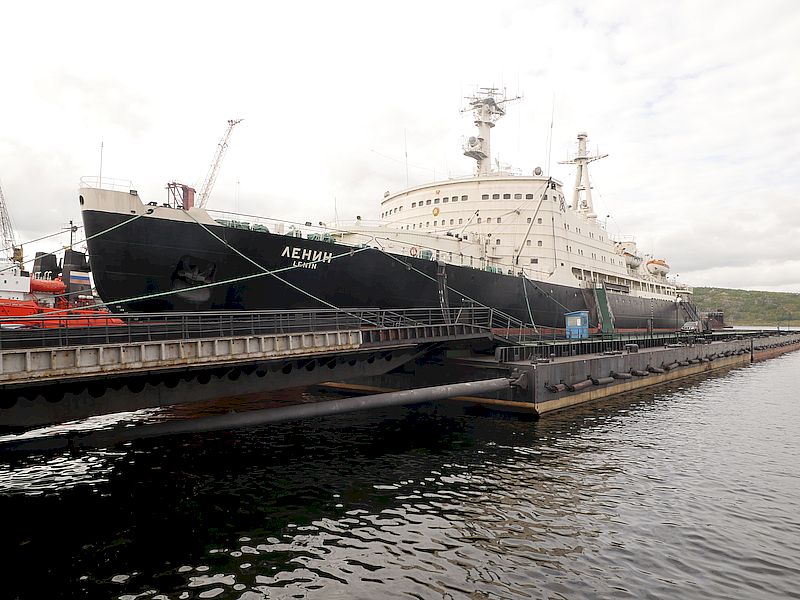 We met Anna and the rest of the team at the imposing Azimut Hotel. Valodja dropped us off after we spent 20 minutes looking at Lenin the Icebreaker. A nuclear ice breaker which was a museum today. It had ploughed through 65 000 miles of pack ice during its career. And had a couple of nuclear incidents. Too. After leaving Valodja we were ready to meet the vice governor of Murmansk, Yevgeny Nikora. 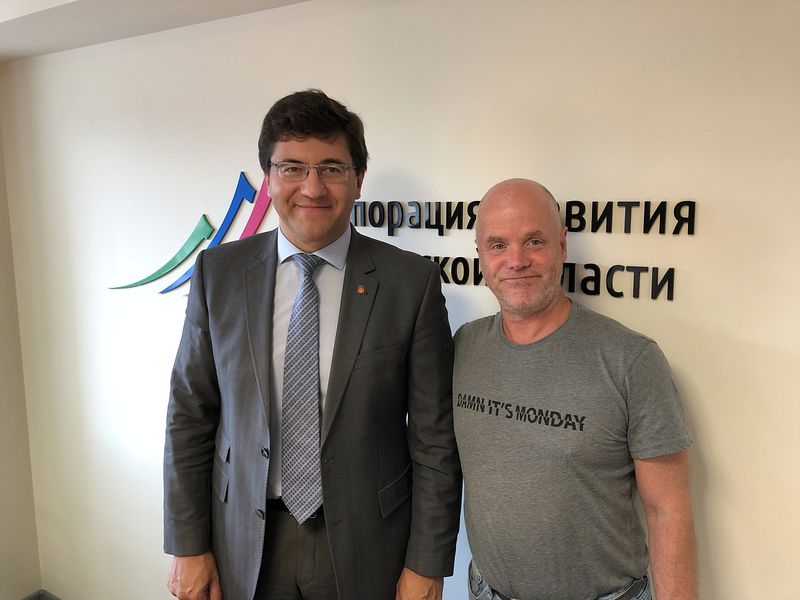 Anna was the translator. Of course. Though on and off during the meeting she was corrected by the vice governor. He obviously knew some English. And he knew a lot about the energy situation in Murmansk. And the challenges ahead. He impressed with his energy and knowledge. The backdrop of Murmansk behind his back was as impressive. And he dealt well with the questions we shot at him. Like if he had changed his own ways as regards to dealing with a sustainable future. He said he tried to avoid plastic bags among other things. It was also the classic power game of those in charge. An expensive suit and watch. Great view. Modern office. Two pretty secretaries. I guess this is the way it is. The whole macho thing. 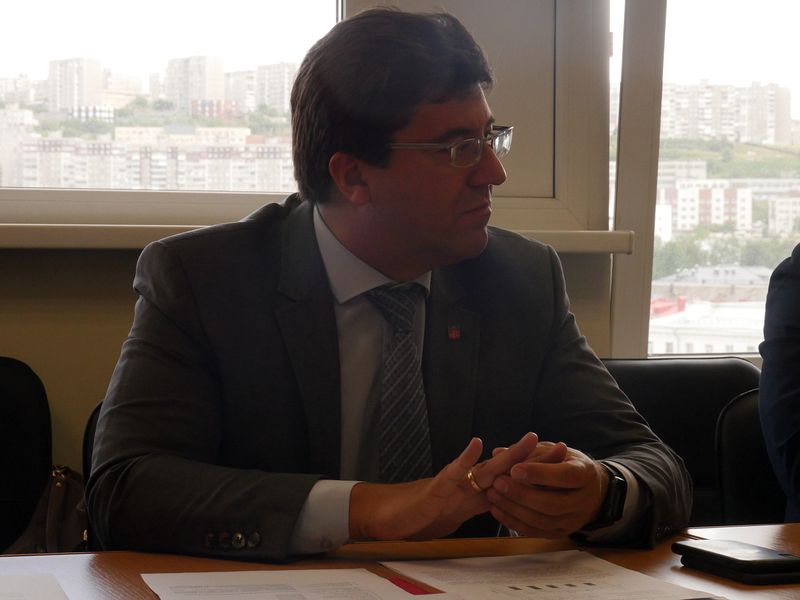 We left Azimut, apparently the tallest building in the Arctic. And went to a meeting with Russian journalists. Indeed another highlight of the trip. I believes many journalists in the West is of the opinion that the Russian journalists have no freedom of speech at all. And if they do, it is at a high cost. But I think most of us in the team, had an idea what was coming up. Much due to the knowledgeable and fearless Anna. One of the journalists, an elder gent, worked for a government newspaper. A young man worked for a commercial site, short texts, big photos, modern style. And a young lady for a newspaper in between the two. They were very open with their situation. Like most other people we had come across on these trips. The elder gent who had worked at the same newspaper since the Soviet era, he said his job was not to analyze, but to report what actually was said. Then it was up to the reader to judge. The young man he said, obviously if something negative came up as regards to their sponsors, they would avoid the issue as much as possible. The young lady was of the same opinion. So, basically, they report what they see and get told as much as to the factual situation as possible. Which I guess is what journalists should do. To a certain degree. So I asked if they don´t use their editorials to speculate, opinionate and condemn/cheer more. To my surprise, editorials doesn´t exist. Marina, a real and properly trained journalist, said that editorials was an Anglo-Saxon idea and invention. 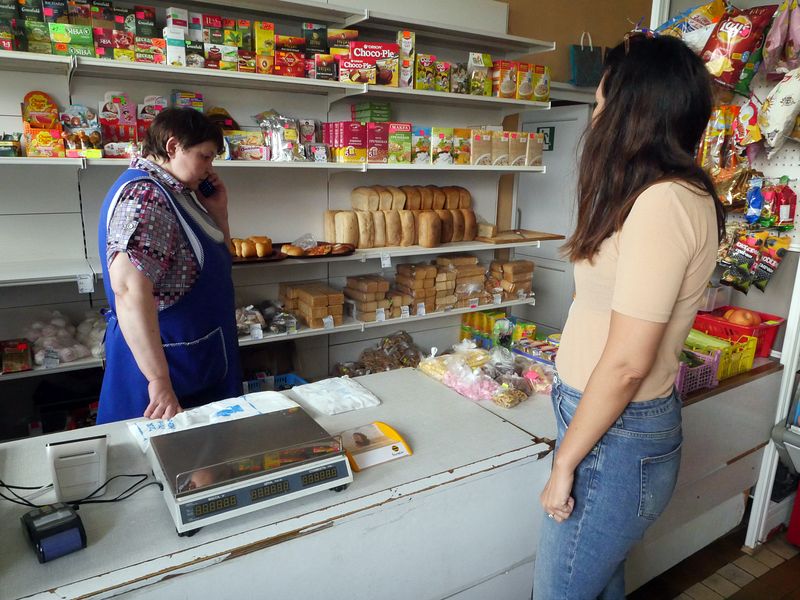 I was learning a lot from Marina and the other journalists. For example, she didn´t want to receive presents from people we visited. Like a drinking flask and hot mug. Neither did she want to be on the picture with vice governor of Murmansk. Rightly to avoid coming across as corrupted. I have never actually thought about that. But then again, I am not a real journalist. I took the gifts. And I posed with the vice governor. Why? For me, it is just a gut instinct as an explorer. Not accepting gifts on route as an explorer, is really not good. Posing on photos with power opens doors and makes meeting officials on route easier. Especially in Russia. Which is still in the hand of authoritative power structures. Tim posed with Yevgeny Nikora as well. Possibly with the same ideas as me.

On route back through the center of Murmansk to the hotel, Tim took us a to an antique shop. It had a lot of old Soviet kitsch. A lot of rubbish too. But exciting to see. And back at the hotel, in the hotel lobby, one can by old Soviet fur hats with the red star in front. I didn´t buy one this time either. I am just stingy. 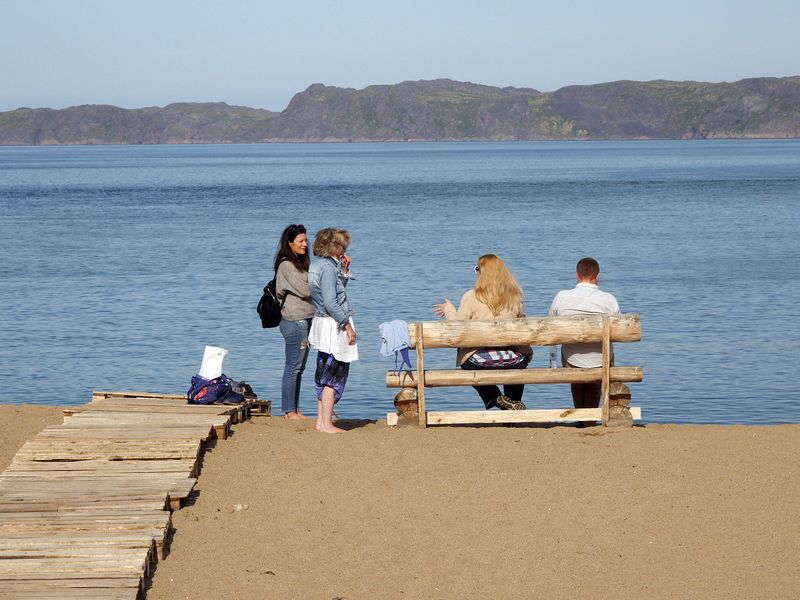 Next day we entered a Finnish minibus with a table with bottle holders at the back. Our final day would take us to the old village of Teriberka. Earlier in the morning with had met a representative for Enel. The idea was to build a windmill park. The representative was very open with the logistic problems of building it. This morning we had a lot of opinions. And it the end of it all, we felt slightly concerned about the project. It was almost like they had forgotten the winter conditions in the area. But we also learnt about the bureaucratical trials involved in any enterprise set up in Russia. 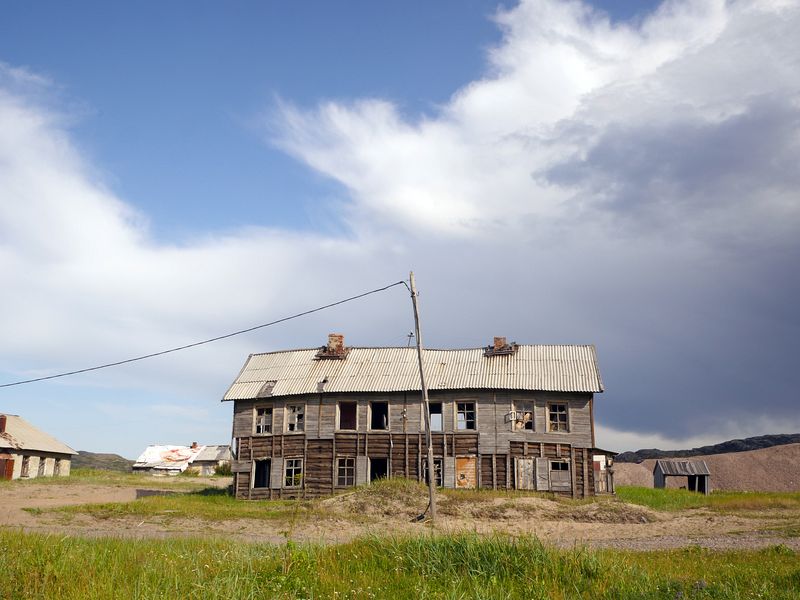 Teriberka gives you somewhat of the end of the world feeling after three bumpy hours of getting there. The Barents Sea can be seen and a feeling of going to the North Pole is strong. Today the old village have been moved into a new location just a few miles away. And it is turning into a Russian holiday place. Which still means rubbish and smoking all over the place. I really enjoyed walking through the old village, seeing the old houses from way back and the Soviet Era. And the fresh air was a relief. Once upon a time it was one big collective farm. 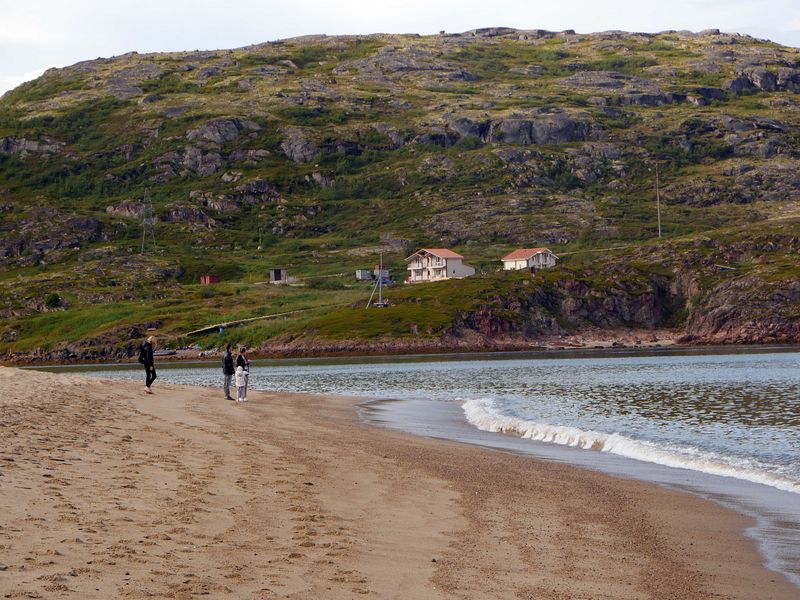 The new town was less nice. Villagers had been moved against their will here, but the authorities deemed the old village to uncomfortable. And now they are all holed up in the Russian style of block apartments. One new, but many old. It was a normal above the Arctic circle Russian town full of above the ground piping, rust and a small bread shop. And dogs. Plenty of dogs. And very nice local people. 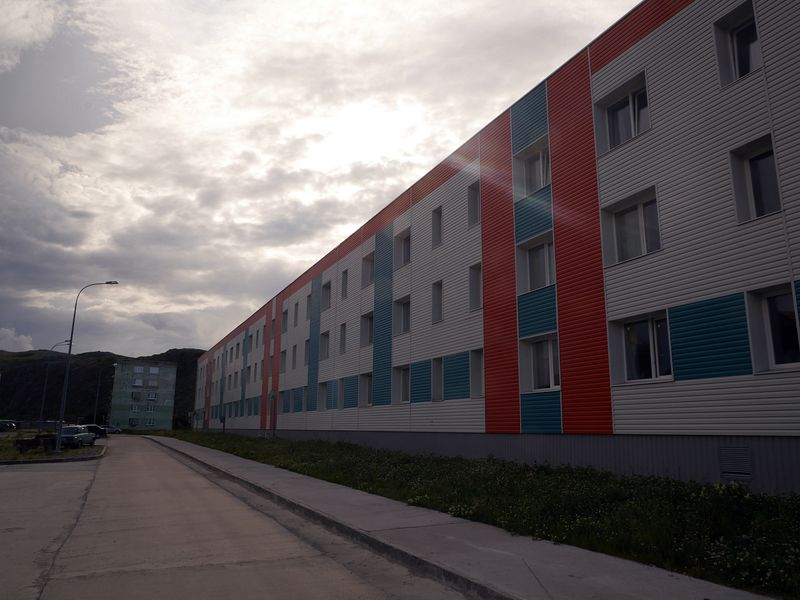 The trip back to Murmansk was fast. We passed the windswept open tundra where ENEL is starting their windmill park. Local people were out picking cloudberries. A few ravens were out searching. Lots of tarns and streams. A beautiful area. But Russia and tundra are vast and big. And I personally see many advantages with windmills. Compared to fossil fuels and nuclear, for sure. I understand costs are high, they make an impact on the pristine surroundings, scare wildlife away and much more, but what is the choice a growing consumer society have these days? Though, I hear the main problem with the energy in the Murmansk area, is the loss of energy during transport from each respective energy source.

We left Murmansk in the middle of the night. What a fantastic journey. Tim from Barents Press is made for setting up important exchanges like this. Positive, open, outgoing and with a big heart. A real eye opener this journey.