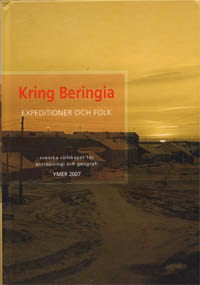 Dear Readers, I will on and off publish news from my way to initiating a new Expedition. If there is any news to publish, that is….First out is an article from the Kolyma Expedition which is presently published in the annual book from The Swedish Society for Antropolgy and Geography. It is, of course, an honour having been published in their annual book called Ymer.

SSAG was founded under its present name in 1877, as an extension of the activities of the Association for Anthropology founded in 1873. This was a time of great exploratory expeditions, and the SSAG took a particularly active part in the scientific description of the Arctic region, highlighted by the ‘Vega’ voyage through the passage north of Siberia led by Adolf Erik Nordenskiöld in 1878-1879. The symbol of the Society shows a woman with laurel wreaths, a native with a globe, and the Vega ship at a rocky coast.

The spirit of Nordenskiöld permeated much of SSAG’s activities with lectures and expeditions by geographer Otto Nordenskjöld to Antarctica in 1901-03, anthropologist Erland Nordenskiöld to South America and by explorer Sven Hedin to Central Asia. But SSAG’s activities also included research on Swedish Ethnology (Sigurd Erixon), Baltic urban geography (Sten De Geer) and the beginning of geopolitics (Rudolf Kjellén), to name a few of renowned members during the first fifty years.