At breakfast I was approached by Mikael. He had been to one of my lectures like 30 years ago in Eskilstuna.

Mikael came across as a very pleasant fella. He said had been inspired by the lecture. Oddly enough. He had later bought himself a touring bicycle. And cycled for 11 memorable days together with his then 11-year-old son. Today he was specializing in helping people with stress release. A stress consultant and survival expert. Work which is done outside in nature. He wants people to get out into the forest again. To find themselves. To feel good. I liked him immediately. And I realized I was looking forward to being part of a group again. And if they were half as nice as Mikael, it would be a great group. Most of the time, being a film maker is a lonely job. 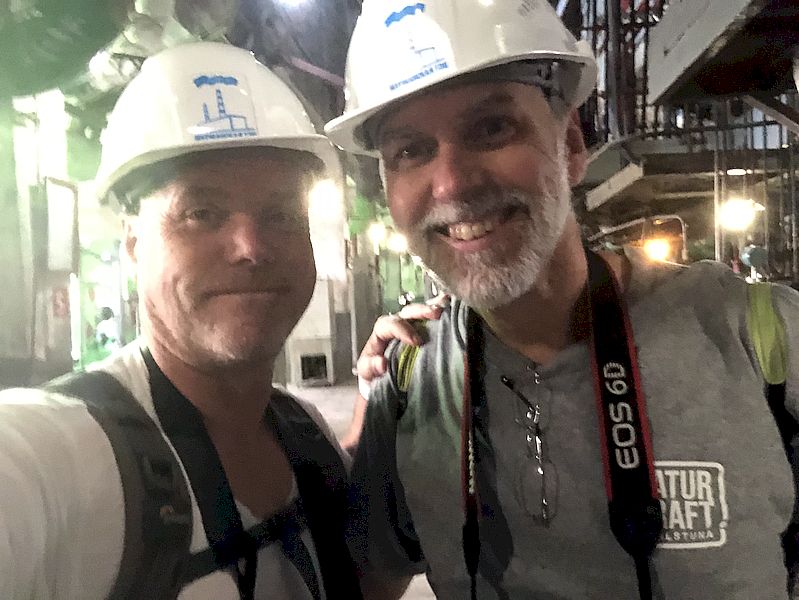 After breakfast I met the rest of the group in the lobby. They all turned out being nice. Most of us middle aged. Everyone trying to figure out life. Great group. Tim from Barents Press introduced himself. He had done and organized similar trips since 2016. More than 200 journalists have been part of this exchange. We were part of a project this time called Rabota19. The theme was energy. And climate change. And dominated by these questions:

How is Russia doing when it comes to new energy sources? Are nuclear power and hydro power still dominating? Or is wind- and solar power competing? 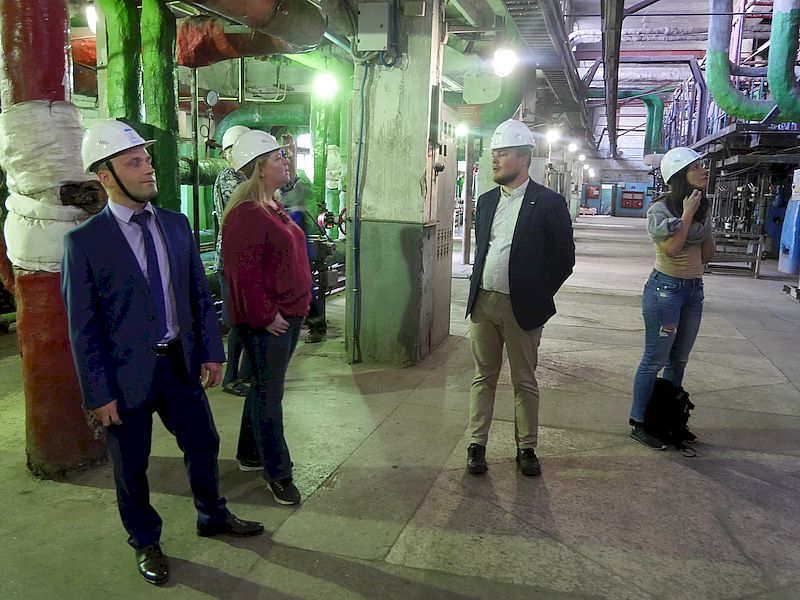 Tim turned out to be a gregarious, warm and knowledgeable fella. He introduced us to his Russian counterpart, Anna. She was a local Murmansk journalist from Barents press and would be our guide and translator into the world of Russian and Murmansk energy. The two knew each other very well. Anna came across as wise, knowledgeable, open and really there to help us getting perspective on most things Russian. 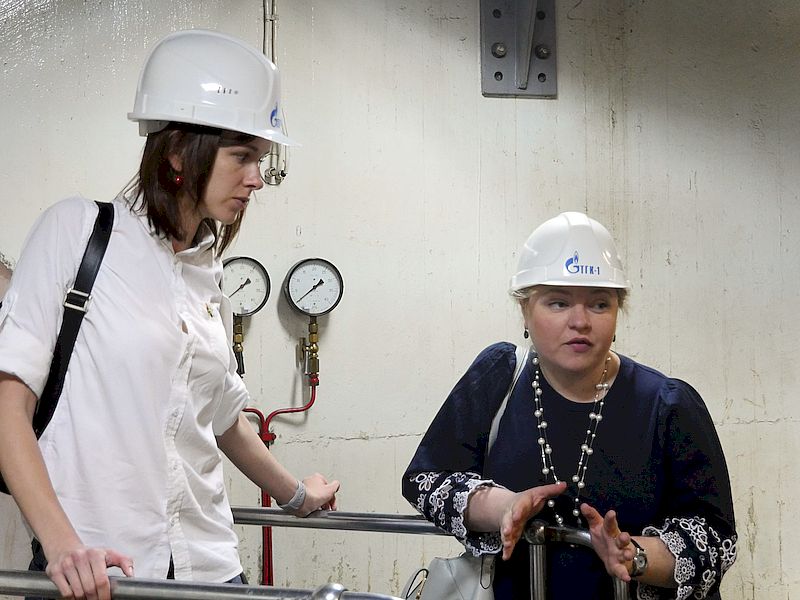 Let me just first tell you that my knowledge about energy, energy resources and alternative ones are limited. I am kind to myself there. But for me this journey was learning about the works of these important resources and putting it into the bigger picture. I am getting more and more involved on the subject of climate change. I have realized that most people cannot take the alarmism involved in to the dramatic changes which are taking place. I would like to make a documentary to help them, and myself, to be able to look at it clearly. And start moving to make a difference. Because I do have a feeling time is running out. Whilst we are contemplating things. Hoping a technical revolution once again will help human kind. And of course, the issue of how we use and what energy the future demands, is the almighty question of survival of us all. And one of them might be nuclear power. But after watching the HBO series Chernobyl, I think most people are scared shitless. So. This opportunity to come here is priceless. It also means me getting a chance to return to Russia. I have spent a lot of time of my exploring life above the Arctic circle. In Russia. But also Greenland, Alaska, Canada, Svalbard, Norway, Finland and Iceland. And Murmansk is one of the bigger Arctic cities with 300 000 inhabitants. And I also want to find out how do they deal with this “isolation” and the harsher climate? Is everything like heating as expensive as in Greenland or Northern Canada? What are their energy needs? Is it still the destructive coal which is dominating? And crude oil? 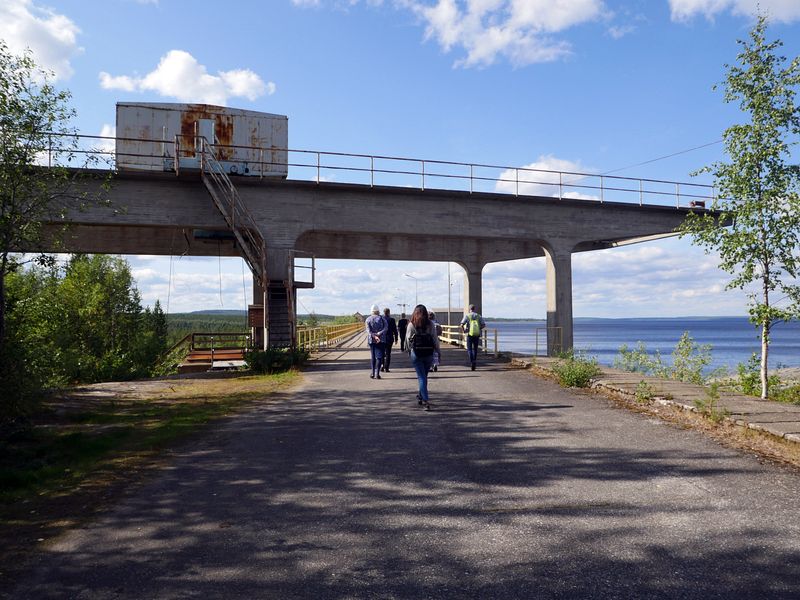 Our first visit is to Upper Toluma Hydro Power plant. I had Porjus Hydro Power Plant in my head when entering the minibus. We -the Strandberg Family- passed it twice during our ascent of the highest peak in Sweden this summer, Kebnekaise. It felt like a science fiction move and seeing the moon landscape beyond the dam wall was sad and scary. For the eye. I understand we need energy to support our crazy consumerism globally. But it didn´t look good. 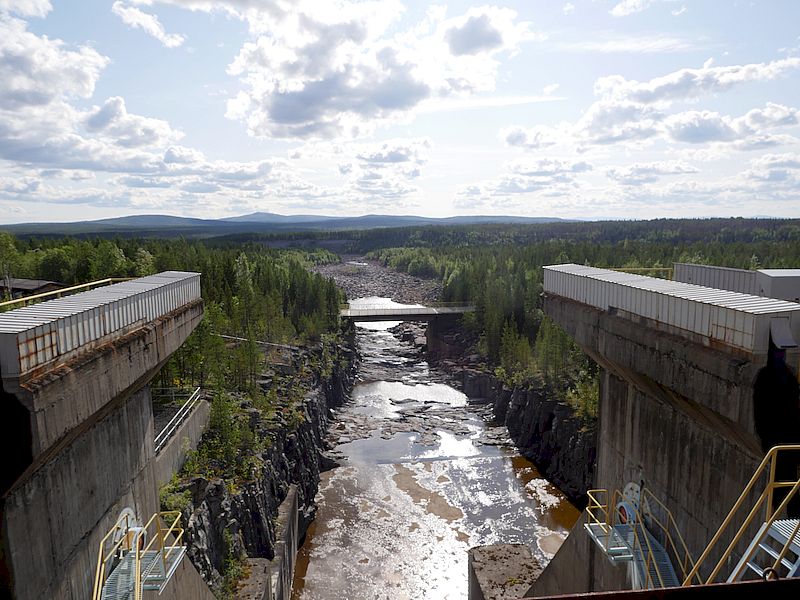 One of the pleasant new team members was Gunilla from Stockholm. She had lived in the old USSR, spoke fluent Russian, had strong opinions, seemed to know lots about energy and exposed a sharp intelligence. She had brought a box of iodine. 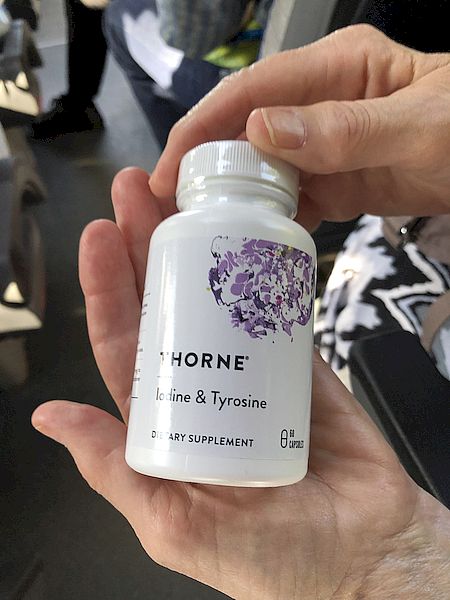 “Do we need these pills?” I asked Anna.

She shook her head.

“You have just bought the propaganda. Research it.”

Anna had met many Nordic journalists. And others. And she was used to an array of misconceptions about Russia. She took it with ease. She added the pills could be easily bought over the counter in Murmansk. Iodine is said to help against nuclear radiation. I think we were all having the upcoming visit to the Kola Nuclear plant in our heads. Gunilla was worried about possible radiation and didn´t´t fully trust what the Russians say about security. Or about most things. Russia had been a big part of her grown up life. She also mentioned the HBO series Chernobyl and had even brought a CD with the series. She suggested we should all see it in the evenings. Gunilla was important in the group with her questioning. She didn´t buy everything we got told. She was also very pleasant. Like everyone else in the group. We were a mixed group. Some of us a proper journalist, like Tim, Marina and Jimmy. They were employed by established media. Others, like myself, freelancers. A good group set up. I belong to the people who believe most things initially. I give everyone the benefit of the doubt. But I do most research afterwards. I would do the same this time too. 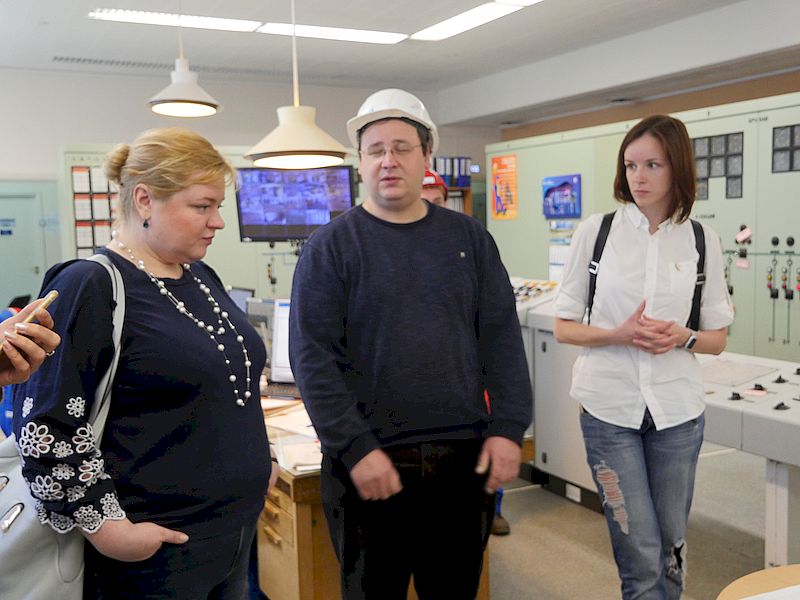 Our first visit was to a hydropower plant on the upper shore of the Tuloma River. It was somehow hidden away in the beautiful taiga. And it was a sunny day and the river looked inviting. It could have been at home in Dalarna. Same environment. We stopped at the gate, where our passports got checked carefully. The people doing the job came across as tense. But Anastasia, who was our guide and representing the company TGK-1, was completely the other way. Smiling, warm and helpful. Once again, when entering to station, our identities were clearly checked word by word. I have never been inside a hydropower station. But I have been under ground a few times. We entered a narrow elevator and moved 50 meters underground. My first feeling was being inside a mine. Cold, raw air and signs of humankind’s brutality on earth. But it is also amazing what we humans have been able to do, since we stood up some 3-4 million years ago. We all seemed a bit lost initially. 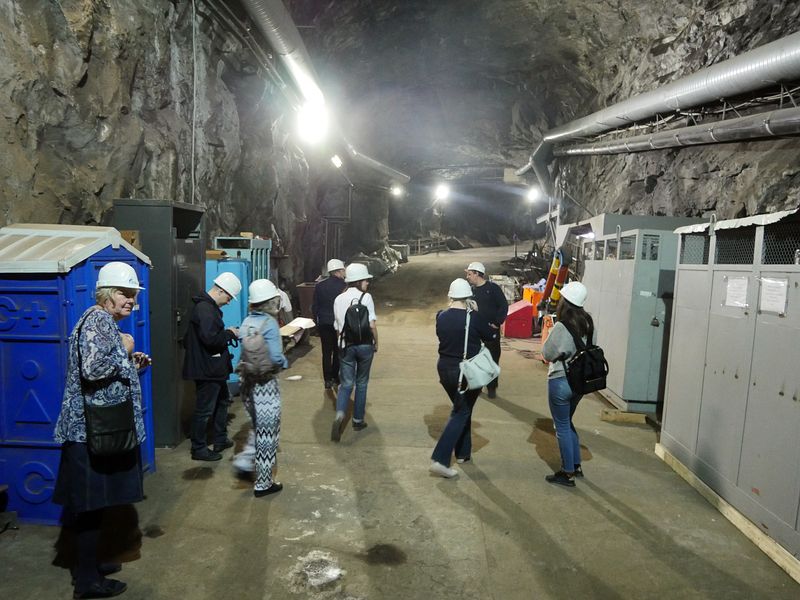 Tim and Gunilla shot of a few questions about output and environmental consequences. They were handled expertly. Anna translated extremely good. One of our main questions which was important to us Swedes was, what happened to the salmon when the river got dammed? Apparently, it killed the local salmon population. They had tried to build a fish ladder, but had failed. And building one, ain´t easy. This we found out by our walking lexicon Ylva. She came from my home county and it was great hearing her dialect. For me, hearing the dialect from my county makes me trust that person a 100%. Ylva had worked for SJ (Swedish State Railways) for many years and had produced their magazine. She had the most extraordinary knowledge about things most people didn´t even think about. An extremely interesting character. And kind. The company had instead built indoor pools to spawn a salmon population. And what we could see it had worked out well. But being an avid fisherman, I noticed they fed the salmon with pellets. Farmed fish tastes bad! And pellets of course is extremely expensive. Which the lady in charge also told us. The idea is to reintroduce the salmon back into the river. Eventually. 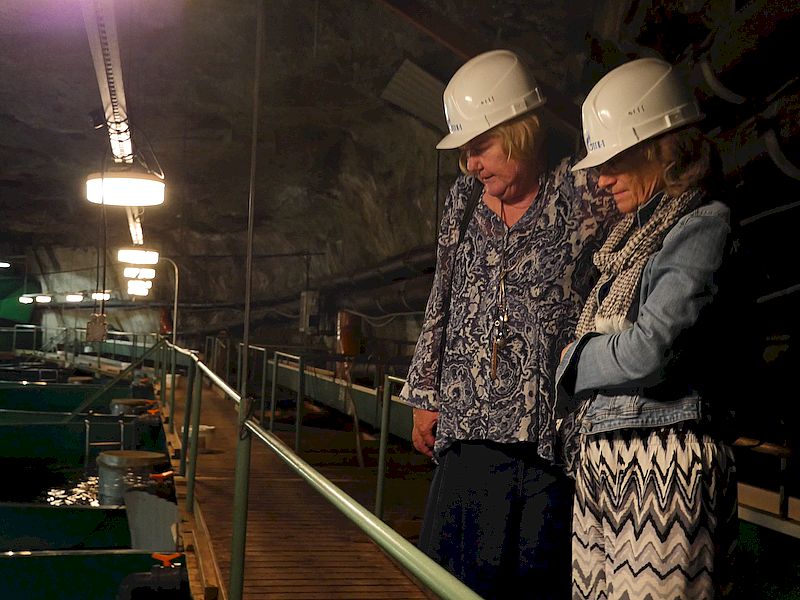 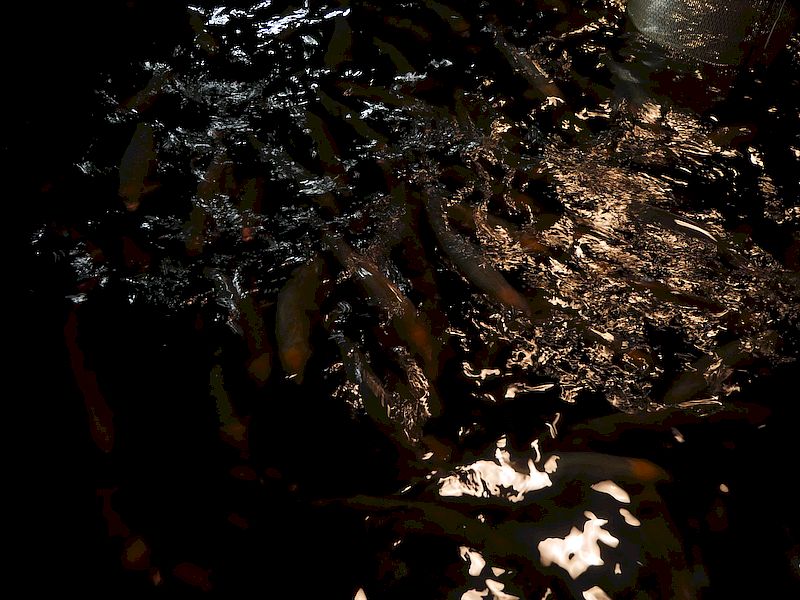 The power station was more than fine, but slightly run down. I have visited many factories in Yakutia and in comparison, things have definitely moved forward. But there´s still a Soviet feeling lingering around. Rough on the outside, but great on the inside. As in most other factories I have visited they also had a small museum of the past. This station was built in the 1960´s. A very nice visit. And, I would like to add, that fishing is big and important in Russia. And there´s certainly an environmental thinking among people nowadays on all levels. But it might not be first on the agenda of important things in life. We got carefully checked out twice, before we shot off to the next plant. Lower Toluma Hydro Station. To a certain degree a relic from the Soviet time. 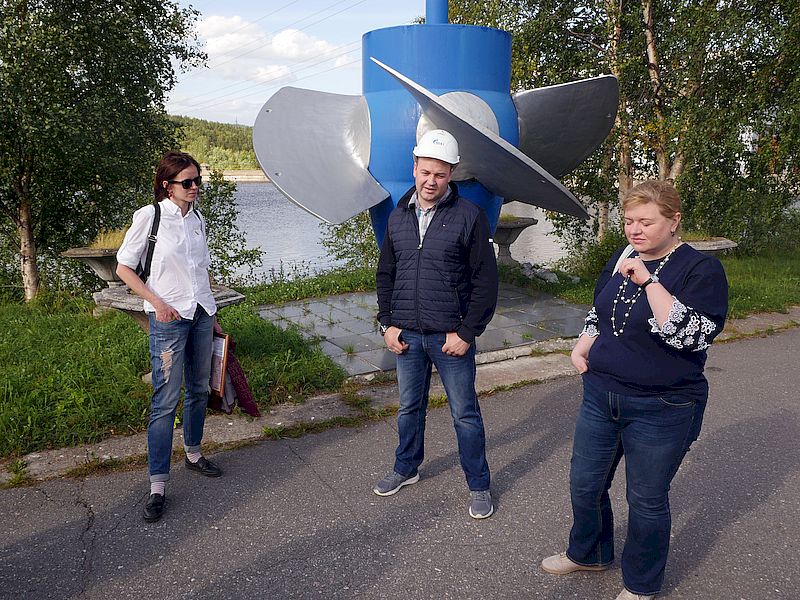 One of the first things we saw was a photo of a crashed Nazi plane. The station, like Murmansk took a serious beating during the Second World War. It was smaller and older. It had a distinct Soviet feel. Big, rough and imposing. It took a bad hit from a German bomber during the Second World War, but they kept the plant up and running. I was amazed how open and how few secrets they seemed to have. They showed us pretty much everything. How it worked. I doubt this would be the same in Sweden if Russian journalists came for the same type of tour. It should be the same. This is good marketing. And breeds confidence. I think the most amazing discovery on top of this openness, was to find out that a turbine from the 60´s still worked well. And the fish ladder worked here. Old stuff works! 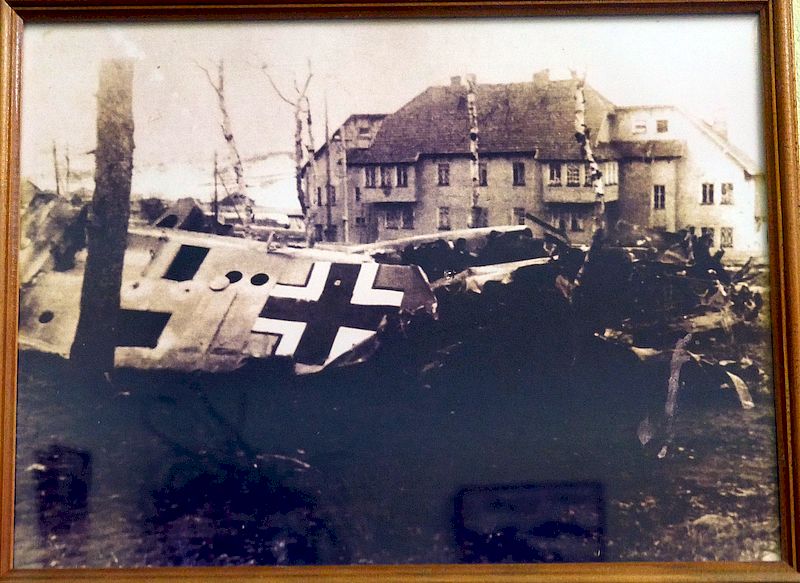 As impressive as this openness and visit, was being part of the group. I learned as much from my colleagues as from the guides. If I compare to my many factory visits back in 2004-5, I can say there´s been a major change. In how locals see the environmental impact. And laws have become harder. Obviously there´s a lack of investment and money, they do look run down. But well-functioning. And the openness is amazing. And supply 44% of the energy of Murmansk. 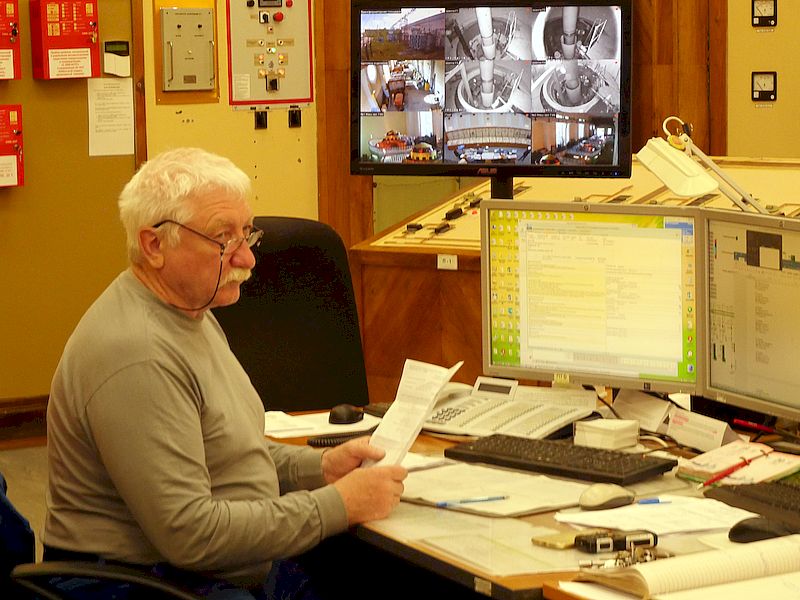 On route back to the hotel in Murmansk we read on the news that the Russians refused to share their information on the recent blast in Archangelsk that caused a radiation spike. And caused immense worry in the West. Not another Chernobyl coming up is the general feeling. 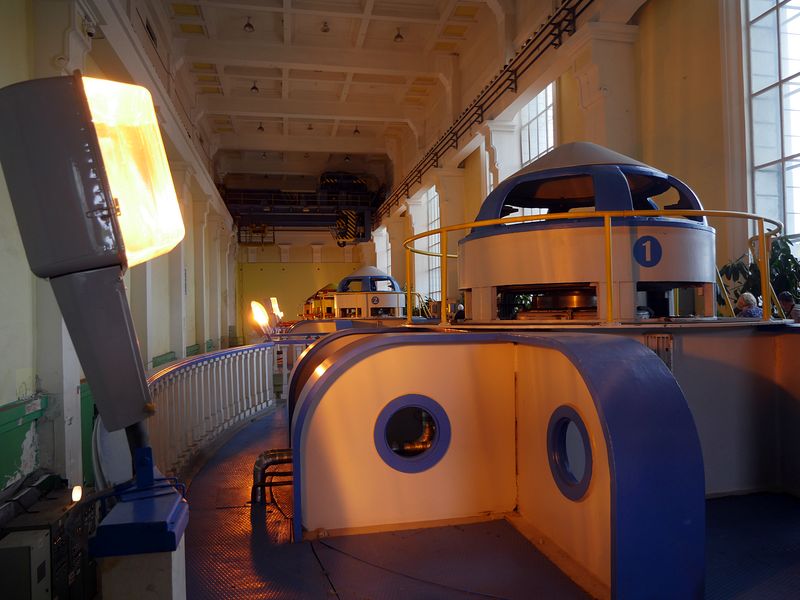 “You can´t trust them. One always gets disappointed” , said Gunilla. She knew the Russians well. But Ylva said:

*The working of hydro power https://en.wikipedia.org/wiki/Hydropower

The North Pole; Nothing But Frozen Water