Skip to content
End of Nordisk Panorama 2019. What a privilige to have a documentary festival on your doorstep. With loads of the best documentaries. Each year.
Each year I feel dead tired afterwards. Too many heavy subjects dealing with the darks sides of humankind. But all films should definitely reach a big audience. Like schools. But, as last year, there´s hardly any audience. 20-30 people. So who are we doing all these expensive documentaries for if no one comes to see them? Or know that a festival exist? Are we showing them for ourselves and other filmmakers and people in the business? I met quite a few people who decide and other film makers. And I think we all wonder about this.
Most of all I met some of the nicest people I know. like Ingrid! 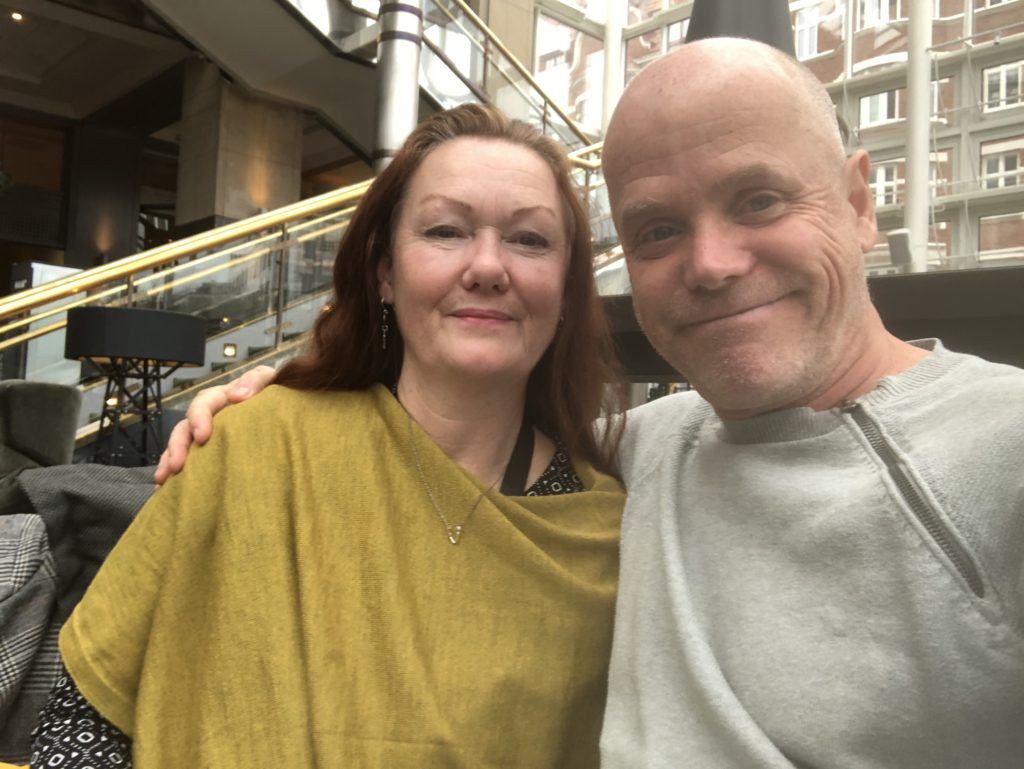 Here´s my notes from the week:
23 september

Another Sunday bites the dust. Up at 6, off to Torup for a 10 km run and showing Ken the sites. Back to make breakfast for the girls, Eva to dance school at 11. Dana did her second gig as a mascot at FC Rosengårds home game and win against Örebro. Ken and me made it to Panora to see Reconstructing Utöya by Carl Javér and Fredrik Lange. Another very profound film. And important. And disturbing.

But. Again. Like Last Year. I am missing films at Nordisk Panorama, which are NOT sponsored. By any of the Scandinavian Film Institutes. They´re all, the docs, very much the same after awhile. Good indeed. Important yes. But. It would be good with something which makes me smile more often. Life is way more than overwhelming drama.

I met an old film mate from NorthPitch in Tromsö a couple of years ago. Sven Arild Storberget. Full of smiles and life as always. Good to see him.

On route back home, Ken and me had another long conversation of what we just had seen. Both tired. Now sleep.

Ah, the girls homework first. then sleep. All of us.

Greenland. I have will be a major part of the rest of my life. I have returned home after having seen a very down-to-earth film from Maniitsoq. A film done by Sturla Pilskog och Sidse Torsholm Larsen. And produced by the usual Greenlandic suspects, Hertling-Peronard and Inuk Högh. Obviously I am touchy when it comes to docs from Greenland. But this a fair documentary well worth seeing. As important was hearing and seeing the two directors afterwards. Who answered all my thoughts. The local people involved had seen it. They had been the one´s wanting to talk about issues as drugs, violence and the more negative aspects. All quite known about this great island. I first thought it was the same story as always. White folks having white folks opinions. But both directors were anthropologists. And the film turned into what the people they met wanted to tell the world. So, for a perspective of a Greenland I know too well, and a realistic one, see tis film! Ken, who knew nothing about Greenland, came out positive. Me, I just felt heavy. Greenland is too damn realistic! It changes you forever. But for the better!

However, we arrived to the film uplifted in spirits! I introduced Ken to one of the most charismatic, spirited and positive people I know. Cissi, my daughters dance teacher. I wonder what she would make out of a year in Greenland?

Another great day in life!

First of all, me and the greatest editor in the world are closing in on a finished product.

Secondly, a very good friend of mine, Ken Kamler comes for his customary yearly visit. See his TED Talk. See link below. Such a nice human being, true explorer and laid back fella! Great to see him again! We immediately started talking about life. Where we stopped last year. just like that. At 20.00 we went downtown Malmö to see Photographer Of War by Boris Bertram. I had high hopes as regards to this documentary. The description caught my eye:

“For 25 years, famed journalist Jan Grarup has covered war and conflicts around the globe with his incredible photography. When his ex-wife Zasha is diagnosed with cancer, Grarup has to rethink his role as a father of four. Director Boris Benjamin Bertram’s powerful and unfiltered portrait of life on the front line offers insights into the struggle to achieve balance with a creativity lived on the edge. ”

I saw a bit of myself there. As another oddball. Expecting a raw insight into what makes him tick. Unfiltered. Photo was great. But for us who are not Danish, and have no idea who Jan Grarup is, there´s too many plots missing. Why is he like this? Like this interesting? And unfiltered, a film like this needs lots of time. Many years. Too be called unfiltered. But having said that, do see it. Just my feeling. Obviously it was a Film Funded Film. And as quick as there is a war documentary, the funds are there. But the story is not new.

But great soundwork too!

And, another point, the interviewer. Why talk so much, why in such a need to be seen? We the audience are there to listen to the director. Who was really good, gave great insightful answers and came across as a great guy.

Wonderful that Nordisk panorama is back. A highlight of the year full of great films. I hope it will be more visitors than last year.