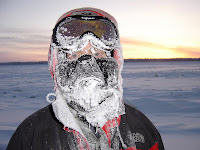 Mikael Strandberg isn’t very tall but his name carries a lot of weight in the international exploration community.
He started his professional career as an explorer two decades ago by bicycling 27,500 kilometres from Patagonia to Alaska, via the infamous Darien Gap jungle. Then he pedaled another 90,000 kilometres from New Zealand to Cairo.
After that he parked the bike and explored Latin America on horseback, which won him admittance into the Long Riders’ Guild, the world’s first international association of equestrian explorers. When he hung up his saddle, he spent a year living among the Masai in Kenya.
Then in 2004 Strandberg made an astonishing winter crossing through Siberia. During this five month sledge journey, mainly done in utter darkness, he experienced a terrifying cold with average temperatures around -50°F, day and night. This trip through the coldest inhabited place on earth caused the King of Sweden to award his intrepid subject a silver medal for courage.
Strandberg has produced three internationally renowned television documentaries, written six books, lectured around the world and been deemed “the best contemporary explorer in the world” by the Explorers Club in London.
Now he’s preparing to begin the Great Desert Expedition – a camel journey that will take him from Oman to Morocco.
But before departing on that adventure, the Swedish Long Rider will tackle a unique educational challenge. He has agreed to assume responsibility for developing a new Equestrian Exploration Department for the Long Riders’ Guild Academic Foundation.
“With Mongolia having become the fortieth country to field Long Riders and join the Guild, there is ample evidence to demonstrate that interest in equestrian exploration is exploding,” said Basha O’Reilly, one of the Guild’s Founding Members. “Earlier this year an impassioned debate was held regarding the fact that a London-based geographic society hadn’t fielded a single expedition in more than a decade. While other organizations vote themselves into obscurity, the Guild has sponsored, mentored or encouraged more than a hundred equestrian expeditions on every continent except Antarctica in less than ten years.”
Yet while enthusiasm runs high, O’Reilly reported, leaders of the equestrian exploration movement remain concerned that this mounted renaissance must adhere to the highest principled standards. As Director of Exploration for the Guild, Strandberg will help the LRGAF promote and develop ethical, safe and responsible equestrian exploration and long distance travel.
“This is an honour that I accept with dignity. I am looking forward to using my experience in organizing different types of expeditions so as to encourage and educate would-be Long Riders around the world,” Strandberg said.
Skeptics may argue that Strandberg and his fellow Long Riders stand little chance of encouraging a generation to take to the saddle and explore Earth. Yet history demonstrates that one person’s passion for exploration and education can indeed change the course of events. This occurred in the fifteenth century when Prince Henry of Portugal established the world’s first school for explorers. At Sagres, on the southwestern tip of Europe, he brought together geographers, cartographers, instrument-makers, astronomers, and mathematicians. The institute was designed to teach navigation, to collect geographical data, invent seafaring equipment and to sponsor expeditions.
The sturdy Swedish explorer is a modern day graduate of that school of thought who has already shared his expertise with the first team of Afghan mountain climbers and a Scandinavian camel expedition crossing the Sahara, not to mention dozens of young adventurers eager for more generalized advice. Strandberg now believes he can help inspire others to explore the world as their forefathers did.
“Although Prince Henry never sailed on any of his expeditions, he is credited with instigating the Age of Discovery. Unlike Henry, who inspired but did not travel, we modern Long Riders’ Guild are determined to lead from the saddle.”
In Strandberg’s case, this means a camel saddle, not an equestrian one.
Though the intrepid Swede has more than twenty years of experience surviving in dangerous places, overcoming tropical diseases, etc., he

Civil War in Sanaa; A report from Haykal Bafana