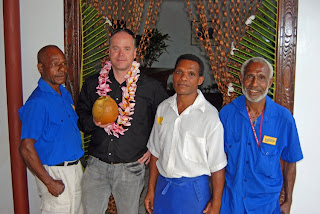 In January this year I had the opportunity to visit Papua New Guinea. It was definitely a highlight of my life. I loved the people. They were unspoilt by life, funny, kind and full of charisma. Whether they were islanders, coastal people, forest dwellers or highlanders. Simon to the far right on the photo is one of the kindest, most impressive people I´ve come across. He´s a coastal man from the Madang district. he was part medicin man, bush expert, ornitologist, teacher and a guide. Spoke excellent english. He was also a genuine story teller. He said he had left the coast twice in his life and that was the scariest experience, so bad that he caught pneumonia and almost froze to death, he said. It was a visit to the western highlands and a town called Mount Hagen. What scared him was the local people, the highlanders. Still warriors and fierce.

“They are so big and muscular and they look at you as they could kill you instantly.”

After that comment, I met a lot of people from all over the island, and they all said that the scariest lot of them all, in wars and in a matter of fact meeting, was the Western Highlanders. Now, look at the photo above, it is me and a Huli namned Paulus, a great guy and typical highlander. Muscular, fierce and with penetrating eyes. I can well understand Simon´s worries. However, even if I am short in a western perspective, I was still bigger then most. At one stage I was joking with Paulus and we were kind of arm wrestling and suddenly he said;

“You are a big and muscular guy. Let us stop.”

Then he laughed. Then I realised the importance of a strong physical appearance. Even today in modern society. It is such a well built in mechanism in our genes, amongst males, do not ever forget, which far too many people do, we are after all a 150 000 year old product physically, and you don´t change that in a day, so the outer physical appereance, it is still of great importance. Then I realised it was time for me to work the weights again and specialize my preparations for the next Expedition in the gym. It has helped me in many ways, even at the extreme end, when it comes to pure survival, but also, it does appeal to a certain amount of ladies. They seem to think it makes a real man. There´s no harm in that.

I think we all, we folks living in the Western Hemisphere, would be happier, much happier, if we did take some time to think about our genes. Our backgrounds. By far, the happiest time in my life, was those three months of pure survival on hunting and fishing that Johan Ivarsson and I had to do on the Kolyma Expedition. Nature, stillness, instinct and awarness.