“I didn´t want to get close enough, because of the size of it”, says Witold Glinski to the interviewer from his home in Cornwall; “We didn´t have any physical strength at that time, to defend ourselves. It was muscular. I didn´t intend to spend time with those type of creatures, because they didn´t look like things that you can approach and reason with.”

This extra ordinary comment starts the documentary, The Long Walk, 70 years later produced by sponsors of The Polish team who set off from the Siberian city of Yakutsk in May 2010 and arrived in Calcutta October 2010. Witold Glinski was referring to the abominable Snowman, or Yeti.

I first got into contact with Tomasz Grzywaczewski just before he was setting off on this journey, a kind of a recreation of the Long Walk, which was made globally famous by the book written by Slavomir Rawicz. It has been made even more famous lately, due to the film by Peter Weir called The Way Back. But it is a very controversial journey. For this reason, Peter Weir decided to note for the viewer that his film was inspired by true events. Still today, the theories are many as regards to who actually did the Long Walk.

One of the main reasons Tomasz Grzywachzewski and his pals Bartosz Malinowski and Filip Droszdz did this journey, 6500 kilometers (approx. 4000 miles), all the way from a Siberian prison camp to India, was to put forward Witold Glinski as the real hero. An idea backed by John Dyson in a Readers Digest article on the subject. But strongly questioned by Leszek Gliniecki in this story. And after seeing this interview with Witold Glinski, which I consider one of the highlights of this quite complicated documentary, I have to question his claims myself. I think that comment makes a profound damage to his claims. There´s absolutely no proof of the existence of this beast. And anyone claiming to have met the Yeti has a serious problem with the truth issue. The documentary is not yet available on the market, but has a lot of very interesting content for this big group of people who are actively involved in the Long Walk. Witold Glinski´s Yeti claim is one of them. It isn´t the easiest of documentaries to understand for a viewer, who have no idea about the Long Walk. It is also partly dramatized which makes it even more difficult to follow. But the photography is excellent and the journey in itself is a great feat. Even though the documentary shows the team doing a lot of travelling by public transport.

Here´s the first interview I did with Tomasz the 28th of November 2010 as regards to his journey and conclusions on which the documentary is based:

“It is a lie”, Tomasz Grzywaczewski says in a long conversation; “By doing this Expedition, we wanted to show who the real hero was. Who really made The Long walk.”

The Long Walk. 6500 kilometers (approx. 4000 miles) of walking to freedom. All the way from a Siberian prison camp to India. A trek through frozen forests, over mountains and across deserts on a journey that took 11 months. The book turned into an international best seller. In January 2011 Hollywood will release a film called The Way Back based on the story. It is probably one of the hardest walks in history. It made the Polish Cavalry officer Slavomir Rawicz famous. “The inspiration for our expedition was the story of the Long Walk, because this is one of the greatest escape stories in world history”, Tomasz continues; “But also an astonishing example of one man´s will to survive and desire to be free. Our aim was to show that the real hero of the Great Escape was a Polish man named Witold Glinski. Not Slavomir Rawicz. And to prove that it had happened.”

Together with Bartosz Malinowski and Filip Droszdz,Tomasz Grzywaczewski set off from the Siberian city of Yakutsk in May 2010 with the hope to arrive in Calcutta by October 2010.

“First of all we floated 2200 kilometers down the Lena River” , Tomasz tells ExWeb; “And after that we trekked 1000 kilometers alongside the eastern Baikal Lake shore, followed by 300 kilometers of horse
riding and finished off 4500 kilometers on a bicycle through Gobi Desert to Calcutta in India. We arrived the 11th of November.”

Mikael: “What was the hardest part of your journey?”

Tomasz: “Definitely the toughest part of the expedition was Siberia and especially the taiga in the Barguzinskie Mountain Range. Also the Gobi desert and some parts of the Tibetan Plateau were really hard going.”

Tomasz: “The insects, I just say the insects in the Siberian taiga. It is a paradise for insects of all kinds. Mosquitoes, ticks and finally gnats. All these creatures were biting us permanently. Their buzzing was as loud as a swarm of wasps! Sometimes we had 20-30 ticks on our trousers and another 20 on jackets.” Mikael: “Any specific part of the taiga which was harder than the other?”

Tomasz: “The Barguzinskie Mountains was a nightmare. These mountains are probably the remotest place in central Siberia. We spent 3 weeks there meeting nobody. There were only animal paths to follow and the forest was like a jungle. It was full of felled trees, bushes and thick forest that made marching extremely difficult. We did about 10 kilometers a day. When we finally reached an inhabited valley, local people couldn’t believe that we had crossed these mountains because even they don’t go there.

Mikael: “What about the Gobi Desert?”

Tomasz: “We were so thirsty, thirsty, thirsty. If we were constantly hungry in the taiga, in the Gobi we were thirsty all the time. Temperatures reached 50 C, our lips cracked and our noses were bleeding. We could drink two litres of water in one go and we were still thirsty. Of course there were no paved roads on the Mongolian part of the desert so we were pushing the bicycles instead of riding them. The desert is also extremely demanding mentally, because the landscape is never changing in appearance. It was basically a sandy and rocky plain. It felt like we were not moving a centimetre and stood still.

Mikael: “Any problems getting into to Tibet?”

Tomasz: “Well, we entered the Tibetan Autonomous Region illegally because we didn’t have the so called “permit” which can only be issued to organized groups. So in fact, it is impossible for independent travellers to enter Tibet. However, the Chinese soldiers/policeman we met, they were very kind. Instead of stopping us or sending us back to Poland, they just ushered us on saying “gooda, gooda” and “go, go”, giving us thumbs up. And in the end of the traverse we spent a night at an army medical check point and we were examined by an army doctor who checked us to see if we were suffering from Acute Mountain Sickness. He gave as oxygen and painkillers. I had very strong headaches.

Mikael: “How did you find the people along the way?”

Tomasz: “Yes, we visited Mr Glinski and made an interview with him for a Polish TV. After hearing his story and examining his version and trying to find out if there are any mistakes, we can honestly say that he is telling the truth. And even though The Long Walk is well known internationally, almost nobody know about it in Poland. Soon they will know. We are working on an Expedition documentary at this moment who will tell the truth. That Witold Glinski, not Slavomir Rawicz is the true hero.” Tomasz Grzywachzewski has since the journey developed to one of the most interesting polish explorers on the global market and he is a present on The dead road Expedition in Siberia. 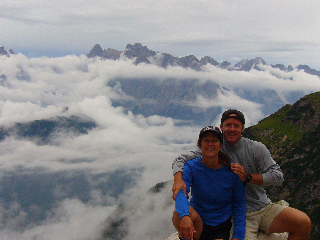